March 9, 2009October 4, 2021 by TscTempest
In a bit of a departure from previous weeks, this week I’m going to add additional thoughts and considerations as we go along. As previously mentioned, Andrea and I went out last Friday to play with an umbrella and to explore exposure issues under some pretty typical shooting conditions, here in Hanoi. At this time of year, it’s pretty overcast and the light is fairly flat. We were out by West Lake shooting at the top of some stairs which go down into the water.Here a shot based on my (Canon 50D) camera’s idea of what a correct exposure should be for this scene: So what to do with such an image. In most cases I would dismiss it as a fail and move on. However, for our purposes here it’s actually useful as a demo piece for playing with some basic post processing techniques.

Let’s get a few things out of the way first. I use Adobe Lightroom, but many of the things I do here can be similarly done with other applications. For example, by using adjustment layers in Photoshop you can achieve similar, ND edits, but I’d recommend making a copy of the image first and then carrying out your edits on that. check out Murray Edward’s Blog entry for more on backing up your files.

Ok, fist off, what I do is make a virtual copy of the image, select the copy, hit the image Reset Button to remove any remove any and all preset import development changes, colour space issues etc.; and look at it. That’s right, just sit there and “Look” at it. Thinking about: it’s strengths and weaknesses; how I felt at the time; what I wanted to achieve with it at the time; what do I want to do with it now?

Next I usually try the Auto WB adjustment and Auto Tone adjustment to see what that does to the image, sometimes it works well, sometimes not. It’s a little yellow, so here’d I’d tweak the Temp slider in the WB panel a little towards the blue end to bring back the cool/cold look that the day had.

Next I’d play with the Whites and Blacks. OK, now we’re cookin’! On the day in spite the overcast feel to it all, the sky was around zone 5, approx. +2- +2 1/2 EV I don’t want anything blown out here. Similarly, because of the low contrast, there wasn’t anything particularly black either. By stretching out the histogram, I now have a better tonal range over this image. It’s starting to look the way I felt about the scene. From here a quick tweak of the curve and we have something like this. Now, the next few steps are not necessary in the overall scheme of things, you could probably leap from here to the straightening and cropping step. But, when I originally conceived this idea, it was a misty, drizzly day and I want to see if I can bring a sense of that day into this picture. So, what we want to do as add some blur to the overall scene without losing too much detail in person. In Lightroom, that means using the slider, you could also possibly play with the sharpening tool and large radii. 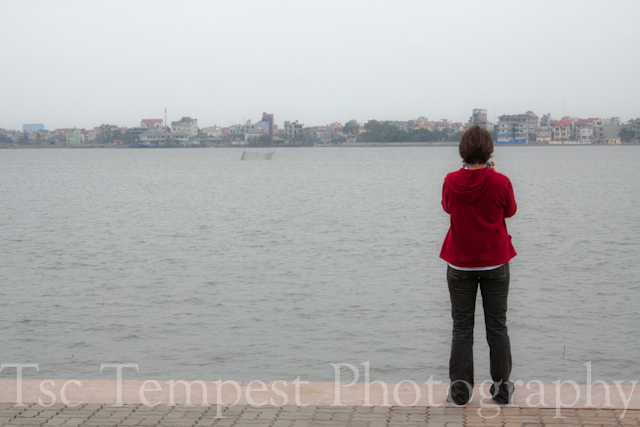 This is still looking too warm so let’s play with the Vibrancy, Saturation and Recovery sliders. Bear in mind as you make various adjustments, you can occasionally clip either the blacks, whites or both, so monitor them and just pull the back a touch when needed. 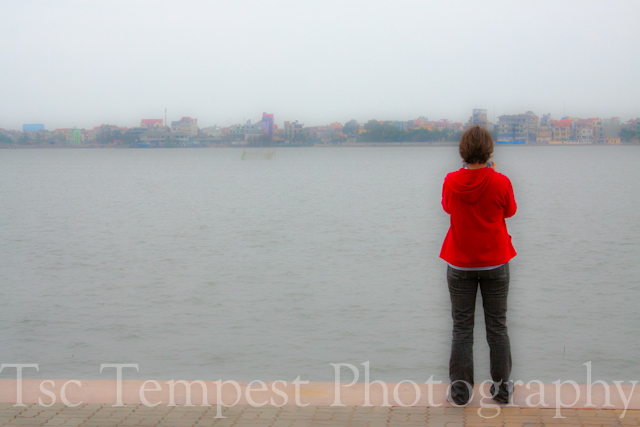 Now we’re starting to get somewhere. The image is much greyer, and flat in the midtones, the background lacks definition as though look through a light mist and the red is not screaming, “Look at me!”

Now, let’s look at the arrangement of the elements. Can’t do much about the horizon coming out of Andrea’s ears, but we can straighten it, and since Andrea makes a strong, dominant, vertical element lets pop her and the horizon somewhere near one to the Thirds lines. 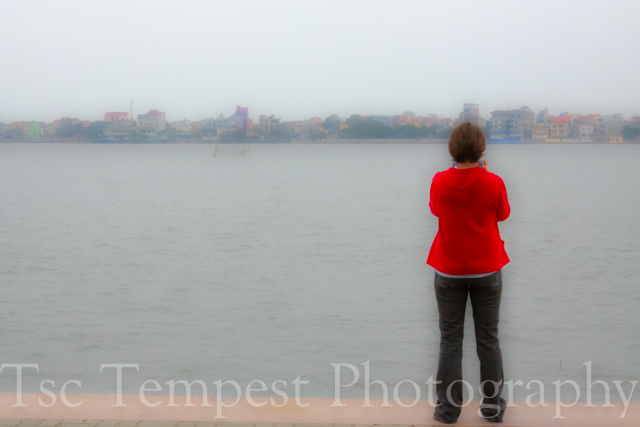 Oops! Can’t get both, which do I want? Horizon or Feet? I decided to go with the feet. By changing the aspect ratio I could get both but it kinda upset the look I was going for.

Ok, now for the distracting detail in the bottom left corner, a touch with the exposure brush? 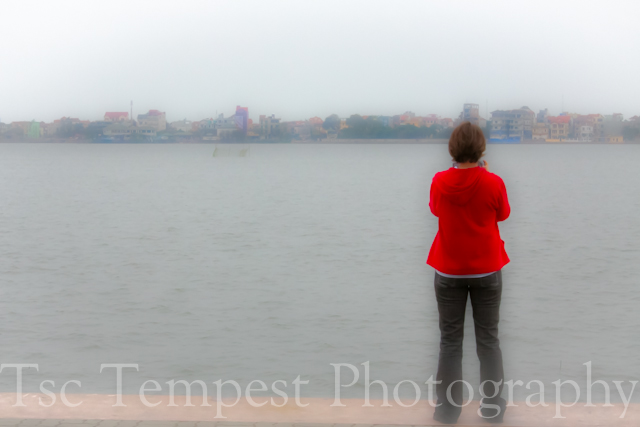 “By Jove! I think we’ve got it, old sock!”It’s quite a distinctly, different picture now. To me, it feels moody, cold, distant, and reflective all at the same time. It hints at the kind of day it was without taking away from the seemingly solitary activity of the subject, who we can vaguely see is taking a picture.All guff aside, this picture has a presence to it that was hidden in the initial, “out of the camera” image we started with. Sculptors often describe their process as trying to uncover the true subject hidden within the rock or medium being used. In a similar way, post-processing our images is a way of uncovering the hidden picture lying within the captured scene.Have a great day.