Last Sunday was Worldwide Pinhole photography Day, so I decided to make a pinhole camera and play around with some exhausted Ilford Ilfospeed x.44M B&W Photographic paper as source material for some paper negatives. The camera I build out of a Chinese Tea Tin lined with black gaffer tape and trilled a hole in it for the pinhole using a set of ultra fine drill bits for the Dremel. Camera Specs: 0.4/75mm f/187.5. Single shot, Paper Negative: 55 x 127mm (diagonal 138.4mm) mounted in a curved plane. Angle of view is 85.4° 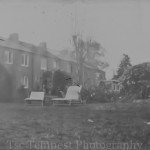