Recently I received an email with basically the following information, World Wide Pinhole Day, which has prompted me to re-consider my current, ongoing love affair with my pinhole bodycap which I’ve made and modified several times for my Canon EOS 7D camera.

The main problem I have with my current pinhole is softness, so soft that, well… it’s just blurry images. Nice in a dreamy like way but, I desire better. Going back to the drawing board, and using Mr Pinhole’s Pinhole Camera Design Calculator, and carefully going over the specs for my camera I’ve come up with what should be the standard specs for a Canon EOS APS-C camera bodycap mounted pinhole.

Using what I have available, bodycap and black film canister cap, the actual focal length comes in at around 40mm (+/- a poofteenth). Re-jiging the calculator values renders the following data:

Thus, with the equipment available, the following data and specifications should create a pinhole that has the equivalent coverage of a ‘Normal‘ Lens for APS-C format.

Consider, all Canon’s dSLR’s have a sensor to lens mount distance of 44mm. It follows then that using a black, plastic, 35mm film canister cap (stopper type) as the pinhole mount inside a standard EF/EF-S-mount bodycap, reduces the focal length to 40mm.

So much for the data. I’ve been back and forth and over and over this. This should produce ‘sharp‘ images. Should…

The problem with sharpness is myriad-fold. First, the optimal focal length, by calculation, is 40.1mm – 1/10th of a millimeter leeway. That’s almost the thickness of a pinhole shim! And the glue, etc. Next, as this is lensless photography, diffraction, and time of day, will effect how different wavelengths of light achieve focus on the sensor. On top of this, hand made pinholes rarely achieve 3 decimal accuracy, especially at less than 1mm dia. e.g. 0.26mm => 38mm focal length; 0.27mm => 41mm focal length; 0.2666mm = 40mm focal length – the tolerances here are very fine indeed!

It follows than that, there will be a certain level of ‘softness‘ in the image. The question then becomes an artistic one, rather than an academic one, How much softness is acceptable; and, when does softness become, just a blurry image?

Looking at how the figure work out, it’s probably best to make as small a hole as possible and then to progressively enlarge it and test against a standard target until you reach something that works for you, or err on the large size and target a nominal 0.27mm dia. pinhole.

Time to start remaking that pinhole for my camera. The previous one was 43mm, no wonder the images I create with it are so dreamily soft.

Just spent the morning making pinholes.The first one turned out to be just about on the money, 0.3mm BUT I didn’t have the right measurement settings in Photoshop so I continued to drill out the hole and stuffed it up. Six tries later I finally drilled a 0.2+ mm pinhole. and It’s shooting really nicely. 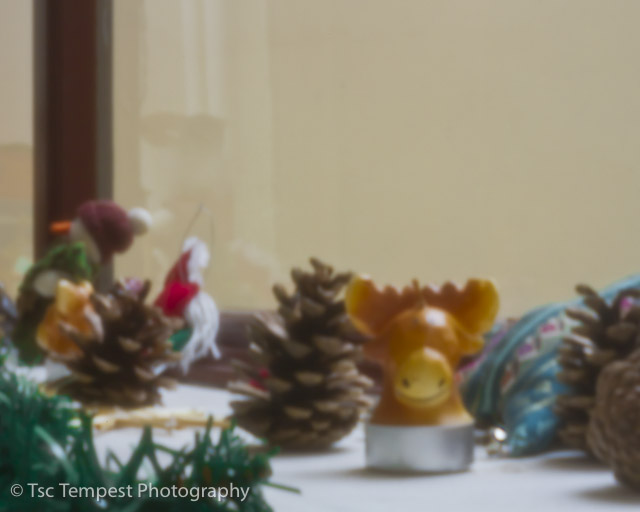 As a final note, I’ve been thinking about how to define, in simple terms, a pinhole as used either on a bodycap, or on a camera. Standard lens nomenclature, specifies the lens focal length & widest aperture. This doesn’t quite work for pinholes. Plus if a pinhole is placed on a camera at non-optimal focal length for hole diameter, then additional confusion arises. I think, that the most appropriate way to address this is to use the following nomenclature:

It’s always a marvel to me that when you seem to have gotten things sorted out, and figure that you’ve got all the bits defined, something new turns up. Well here it is. There is an easier way to do all this and almost anyone, handy, should be able to make a very good bodycap pinhole for the Canon EOS camera.

First let’s look at the camera body. From sensor to lens mount is 44mm (44.1 mm to be precise). The bodycap measures, from the edge that sits flush with the lens mount, to interior cap end, around 4mm. The lens cap plastic is approx. 2mm thick thus by using the lens cap we have available two focal lengths based on whether you put the pinhole inside the cap or outside. These are, 48.1mm and 50.1mm respectively. Now, the pinhole shim takes up a bit of space as well, and based on a soda can, which is what I used, we can more or less figure it out to be about 0.01 mm thick or a shade less. this changes our focal lengths to 48.09mm or 50.11mm.

Now, it turns out that if you drill a 0.3mm hole the optimal focal length is 50.6mm and that the optimal hole diameter for a 50.11mm focal length is 0.298mm Even in Photoshop with a 600ppi scan, the measurement accuracy is only down to 0.1mm. Tell me, can you drill to a three decimal accuracy and measure it effectively? I’ll be buggered if I can. So, 0.3mm is as good as it gets for me.

What this all means is that, if one takes a hypodermic needle, as fine as you can get, and a shim of soda can, place the shim onto a business card and carefully, carefully drill a hole, it is possible to drill a 0.3mm hole +/- a smidgeon that will be just right for a Canon EOS Camera Bodycap Pinhole experiment. The shim should then be mounted on the outside of the bodycap. One needs to make sure that any raised logos or markings are first sanded away. Of course you’ll need a suitable hole through the cap, and the it might pay to paint the inside of the shim prior to glueing it in place (don’t forget to keep the hole clear of paint) so as to minimize internal reflections. To keep the pinhole dust protected, glue a microscope slide cover slip over the outside facing part of the pinhole, otherwise your focal length will change by the thickness of the coverslip.

Based on all this, new information, the Optimal Specs become,